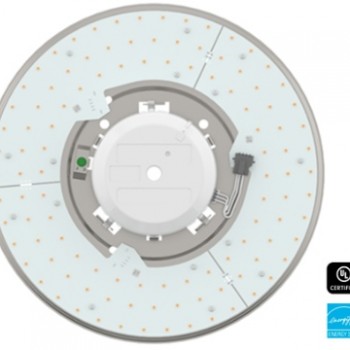 The SR12 series is a UL recognized component (UL 8750). Thus, OEM lighting fixture makers can use the SR12 in new fixtures. The SR12 series is also UL certified to be used as an LED Retrofit Kit (UL 1598C) for the upgrade of existing incandescent or ballasted compact fluorescent (CFL) or High-Intensity Discharge (HID) lighting fixtures to LED. Sealed or unsealed fixtures including labeled wet location fixtures and outdoor listed fixtures can use the light engines. According to Terralux, they deliver up to 135 lumens per watt, which reduces energy consumption by more than 50% compared to compact fluorescent, and 60% compared to HID light sources.

All SR12 models are ENERGY STAR certified as Luminaire Retrofit Kits, which qualifies them for utility rebates. All models have a 7-year warranty, even in non-stop, 24/7 commercial operation. Terralux designed the LED light engines for use in commercial applications. They come in four different lumen packages ranging from 2500 – 4000 lm and have correlated color temperatures of 2700K, 3000K, 3500K, 4000K and 5000K. They feature two driver options including 120VAC phase dimming and universal 120-277V 0-10V dimming, which offers additional control and the potential for additional energy cost savings.