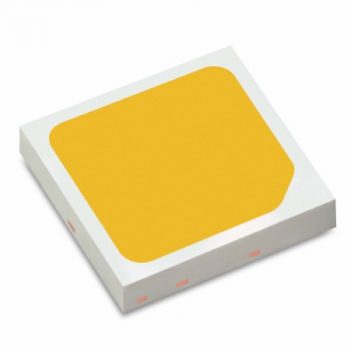 Lumileds based in San Jose, California USA, added the new Luxeon 3030 2D with a square Light Emitting Surface (LES) to its mid-power portfolio. The company says that it specifically optimized the Luxeon 3030 for high flux and maximum reliability for general lighting applications including downlights, high bay and low bay fixtures, as well as outdoor lighting.

“With the new Luxeon 3030 2D, we are able to offer the industry’s highest flux in a two-die mid power package, but also our hot-color targeted approach ensures superior color accuracy to that of other LED manufacturers,” said Mei Yi, product manager of Luxeon 3030 2D for Lumileds.

Lumileds notes that the output performance is significantly enhanced compared to company’s existing Luxeon 3030 2D LED which has a round LES. The company also pointed out that existing customers will still have access to the previous Luxeon 3030 2D, which unlike the new version features a round LES. This original Luxeon 3030 2D with round LES has reportedly been adopted widely, particularly for downlight, A lamp, and industrial lighting.

The company tests and bins their luminaires at 85°C. This hot-color targeting enables the LEDs to deliver specific chromaticity coordinates at the targeted operating temperature of 85°C. Lumileds indicated that this strategy of binning their LEDs at 85°C results in a minimal color shift in real-world operating conditions. Both LM-80 and TM-21 data are available for the new Luxeon 3030 2D with a square LES.