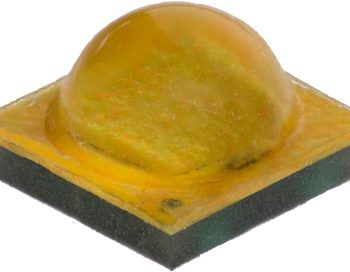  “We are designing a new series of 130 lumens-per-watt high-performance streetlights and the choice to use the new Cree XP-G3 LED was clear,” said Wilbur Tarn, director of OrangeTeK. “The XP-G3 LED delivers high efficacy and high reliability in the familiar XP-G footprint, allowing us to modify elements of an existing design to shorten our design time by half.”

Cree asserts that it pioneered the industry-standard high power 3535 form factor with its XP platform. The XP-G3 takes the performance to greater heights with 205 LPW at 350mA and up to 863 lm at 2A. The XP-G3 LED has already undergone 6,000 hours of LM-80 testing, and the data is immediately available that reveals projected L90 lifetimes well above 50,000 hours, even at an extreme test condition of 105°C and 1500 mA.

“Cree is committed to R&D that enables our customers to deliver the best system value in the market with high-power LEDs,” said Dave Emerson, Cree vice president and general manager, LEDs. “The XP-G3 is the first LED in its class to shatter the 200 LPW barrier, setting a new benchmark for the XP-G class of LED and joining Cree’s other high-power LEDs that deliver this level of performance.”

Cree characterizes and bins the new LEDs at 85°C. The LEDs are available in ANSI White, EasyWhite® 3- and 5-step with color temperatures (2700K – 6500K). They come in CRI options of 70, 80 and 90. Product samples are available now, and production quantities are available with standard lead times.